I’ve been struggling to figure out the perfect first post to kick it off with. Then, as I was sitting reminiscing about my own wedding, I was thinking about some of my favorite moments…One that tops the charts, was the private time my husband-to-be and I had prior to the ceremony and picture frenzy, our first look moment.

We decided to have a “first look” before we walked down the aisle. This totally breaks tradition of not seeing the bride until she walks down the aisle. Have you ever wondered where the tradition stems from? Well, in arranged marriage times (not quite sure when exactly, but a long time ago!), the father of the bride feared if the groom saw the bride beforehand and didn’t find the bride attractive, he would change his mind and not marry her! WHAT?! So this was a tradition I was willing to break!

I did want to have some element of surprise, so I had one of the photographers give him a blindfold and make him wait in the front yard of the house for me to arrive. Then I came up behind him to untie it and the photographer so perfectly captured his smile and love!

It also greatly helped calm my nerves (and hopefully his too!) and allowed us to take the majority of our photos before the ceremony. 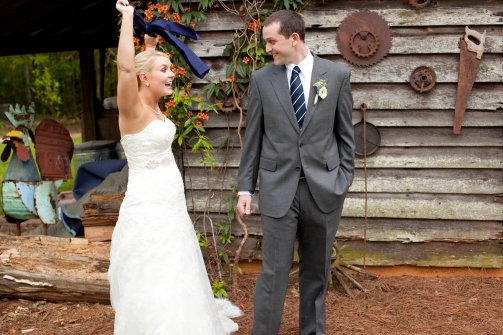 We did our formal couple shots, each family’s shots, and bridesmaids and groomsmens group photos. Of course, we still had a few minutes of pictures afterwards, but the majority of them were done. Another added bonus of doing this in the south is…you’re less likely to be glistening and your makeup and hair are still absolutely perfect! And, in case, you’re not convinced yet about doing a first look, knocking out more pictures beforehand also means getting to your party faster! The day truly flies by, so it’s great to be able to savor and enjoy every minute of it!